Another beautiful day in Little Leaf! After three days of celebrating our country and general weekending, it was wonderful to see everyone’s smiling faces back on the farm! We started our day with a little PWC (Moving our pins, filling our water bottles, and heading to the morning circle – located in the crook of the path). Once we all found ourselves there we outlined a rough plan for the day, although no one was quite sure what our day would be like under the newly established anarchy. We broke out an old favorite – Titantic, made it through a few rounds of Jeep, and learned a new song about a man who helps a bunny hide from a hunter. We capped off our morning sing with the Llama song, although many of the lyrics were left open to interpretation sicne they had been dissolved by last weeks rain.

As we started into the first work block of the day, some Homesteaders and their Peeps felt apprehensive. Why should I keep building a house if there are no laws to stop someone from stealing it? Good question. William called a morning meeting to discuss some possible options for ensuring order. The meeting was
well attended and the group proposed that any house theft should have to pay a fine, and return the house to its rightful owner. Good idea.

We washed, snacked, and headed to the pond. We are definitely getting into the swing of things, and even matched our standing 7 second record while counting off before the swim. Go team!

After lunch, we regrouped and headed back into our second work block. Again, William called a town meeting to try and move forward on previous agenda items. However the small attendance (two other peeps) and the lack of a government to enforce any new laws was frustrating. The meeting did agree that the fine paid by the their should equal the cost of the house. Perhaps this will be helpful framework for a law, should a government be formed later in the game.

Meanwhile, Homesteaders and Peeps were busy as usual. The trading post had extra security, the radio held brief talk shows, the Diversity Shop sold its first pet creeper, furniture was built and HUGE strides were made on many a Peep house. Everyone has been working hard to crunch the numbers and make houses that will protect their Peep without breaking the bank. And they are succeeding. Our village has a bright future.

Finally it was time to clean up. Rain chased us inside for games and we chose to play Murderer, a circle game where death can be avoided with the help of an angel and the narrator gets to tell us all about it.

Tomorrow, if the weather and the weather man cooperate, we will make our long anticipated pizza! We’re looking forward to having an afternoon treat. 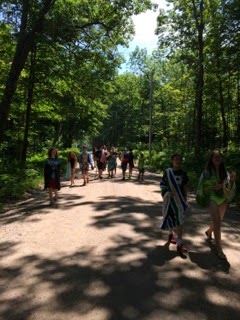 Wishes
Not to be targeted in the game
Finish windows
More games
More respect when gathered in circles
Capture the flag
Thunderstorms
Fish (lots of fish)
That the newspaper goes well
Trusting our instinct
Being at Village all the time!